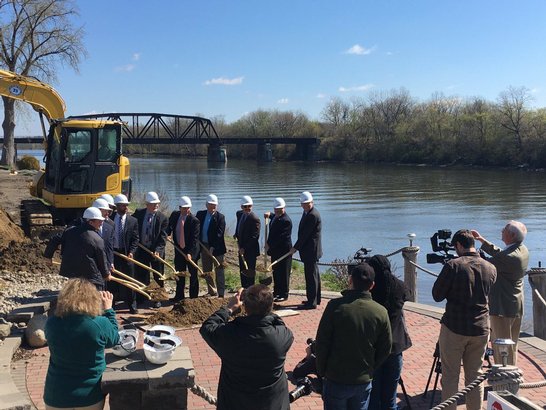 Construction has already begun on the 105-room Homewood Suites hotel by Hilton on Freemans Bridge Road by the Waters Edge Lighthouse. Local officials had a ceremonial groundbreaking on the riverfront property this morning.

Pat Popolizio, owner of the Waters Edge, said the $16 million hotel would be done in about 12 to 13 months and employ an additional 35 people on top of the 85 that now work at the restaurant and banquet hall on site.

“The last thing that we planned on was a hotel,” Popolizio said during the groundbreaking ceremony. “It took us a few years. Finally this is the day I have been waiting for. This is a big day for me and for all of us.”

The hotel comes as the Galesi Group is developing the old Alco site nearby off Erie Boulevard into Mohawk Harbor. The site will have two hotels, a casino hotel with 163 rooms and a 124-room Courtyard by Marriott hotel.

Popolizio said he believes the development will bring additional visitors to Schenectady, along with nearby Glenville.

“I think the casino and other things being built will make it a destination,” he said. “Homewood Suites is a long-stay hotel, which is one of a kind in the area.”

The hotel will not have a restaurant or banquet facility, Popolizio said. He said the Waters Edge and The Terrace would complement the hotel.

Glenville Supervisor Chris Koetzle said he didn’t believe the town would get a hotel. He described it as one of Glenville’s biggest developments in its history.

Koetzle said he expects development to ramp up along Freemans Bridge Road in the near future.

“The town has gone out and got a $150,000 grant that’s going to look into redeveloping this entire corridor from the bridge to Thomas Corners,”

Koetzle said. “We’re going to redevelop it and make it what it can be, not what it has been.”

Reach Gazette reporter Haley Viccaro at 395-3114, hviccaro@dailygazette.net or @HRViccaro on Twitter.
CLICK HERE to read the full article, originally posted by The Gazette on April 27th, 2016.